Remember those cute little black baby chicks - Tony's last hurrah?  Well they have developed into some of the nicest, friendliest and cutest chickens we've ever had!  They follow Marc around and beg to be hand fed - it is adorable.

But - they are growing little pigs - scarfing up food - and I noticed 2 of the roosters getting into a mini fight - more posturing really - but I knew the time had come. 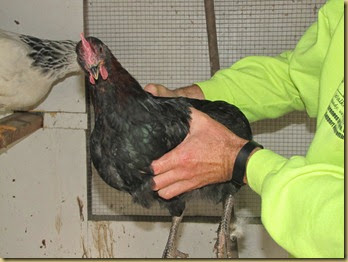 So Tuesday I went out and got a head count.  5 roosters and 5 hens.  I posted on Craigslist and got an immediate response from 2 people.  I reluctantly contacted the one guy - I hated to see such nice animals gone - especially not knowing if they were going to be dinner, but we can't have 6 roosters in our small flock.

The guy came yesterday when Marc was home, and - I'm thrilled to report - that he had established a flock of about 40 hens and had no roosters!  So he wanted them for his girls, not for his dinner table!

He emailed me last night thanking me and saying they were getting used to their new home!!

Archer is doing so much better!  He's getting back to his old self.  And when I clean out the port hardly anything is coming out - just some blood - and the port keeps trying to come out of the ear - a sure sign of healing!  And last night this disgusting black thing - part of the infection from deep in the ear - came out while I was cleaning it.  Frigging gross but leaving nice pink skin under it.  So good news there!!

Finally, an update on my wonderful little fatboy, Chakotay.  He still - like his mommy - wants to eat and eat and eat.  I have been a little lazy about tracking his measurements.  He is such a sweetie - when I call Archer in to clean out his ear, he comes running and stands beside me - supervising.  As soon as we are done he runs around trying to Archer to play and chase him!

Anyway I pulled out the tape measure today and wrapped it at and him.  I was so happy to see that since the last time I measured - 3 months ago - he has lost 1/2 inch from his chest, and stayed the same in his waist.

He - like me - is just never going to be thin.  But he is clearly maintaining well, and for now, I'll take it!!!