I was obese for much longer in my life then I have been not obese.  So you would think that it would take an extremely long time – if ever - for the memories of being that person to fade.

And in some ways – many ways - it is true.  The psychological fear of becoming fat again, the physical reminders of my obesity – those are here to stay.

But in other ways, the memories I have of who that person was and what her life was like – they seem like something I read about – not something that I actually lived with.

I thought about this the other day when I went to the upstairs of our house to put something up there to store.  And I saw this bag.  At first I wasn’t sure what  it was – I looked closer and saw that it was my old CPAP machine.

From the time Marc and I moved in together I snored terribly.  It used to be something I would laugh about.  But it was truly disruptive to Marc’s sleep – especially since he is a horrifically light sleeper as it is.

And it wasn’t just the snoring.  I would go to bed on a Friday night – exhausted from the week – at 11PM.  I would sleep until around 10:30 AM.  Even though I felt as if I had slept, I would emerge with a pounding headache and not feeling rested.

I finally went to the doctor’s and was scheduled to see a specialist.  I spent the night in a hotel like room in the hospital with a ton of wires attached to my head.  I was stopping breathing multiple times per night and, even worse, the non-breathing episodes lasted 30 seconds or more and my oxygen levels were dropping to 59%!!

I was given a sleep apnea machine which I soon became completely dependent on.  Not only did it look incredibly sexy: 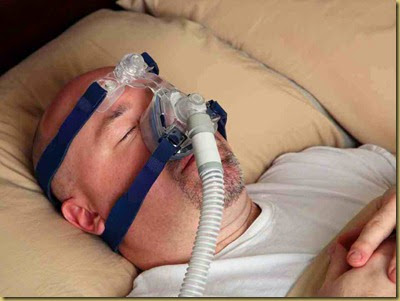 But I had to haul the machine and all of it’s extras (like distilled water) with us everywhere.  I had to have it when we camped – stuck next to our air mattress.

And I didn’t think a thing about it – it is amazing what we can – and do – get used to.

Interestingly enough, neither my doctor or the specialist mentioned my weight and how losing weight could probably solve the problem.

When I started to lose weight, I continued to wear the machine.  I had lost quite a bit and then suddenly realized that it was not comfortable and that air being forced into me while I slept didn’t feel normal.

So I tried not wearing it.  I slept great and Marc said I didn’t snore.  I woke up early.  I felt refreshed.  So the machine was retired for good.

Fortunately I lost weight before I started to have other, more serious, health issues.  I knock on wood that I never had to take cholesterol or high blood pressure meds and that I never developed diabetes.  I wonder if I had if that would have made me wake up…