Growing up, my best friend was Elene.  We lived in the same village and spent loads of time at each others houses and were pretty much inseparable.

In high school, we remained close, but as graduation neared, there was a bit of a pull towards each of us going to different groups.  We went to the same college, but, as sometimes happens with even our closest friends, we grew apart and she moved out west and we completely lost touch.

Years later, she returned to the area and we ran into each other, but never re-established the bond.  Facebook can be beyond useless at times, but sometimes, it can reunite old friends – which is what happened with Elene and I.

We were both very overweight in school – me moreso then her – but she was heavy to begin with and had gained weight as she got older.

Last year she had a health crisis that left her hospitalized and in immediate need of a radical lifestyle change.  In fact, I didn’t remember the date, but it was exactly a year ago this weekend!

I won’t go into much detail because I’m hopeful that she will choose to share her story with you guys in the near future.

But after the crisis I reached out offering any help I could give her.  She took her health crisis seriously and started exercising and eating better – which led weight loss and a vast turnaround in her health

We were in.  We have been talking for months about our training and she even started running some to lead to overall fitness.  Bright and early this morning we met at the venue. 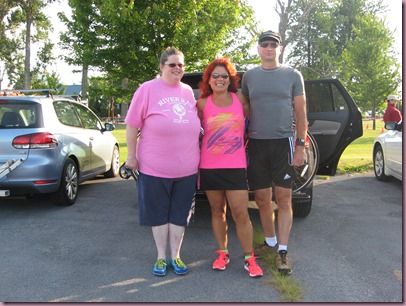 She appeared nervous as we made our way over to where the swimmers entered the water.  As they took off, we cheered for her as well as all the other participants. 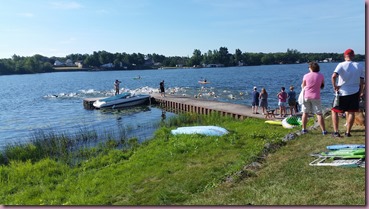 As Elene rounded the last turn, Marc headed up to get his bike all set and I waited.  As she came out of the water I congratulated her – she had DONE IT!  We walked and jogged up to the transition where Marc was waiting.  Elene handed the ankle timer to him and he took off.

We had some time to wait for Marc to do his part, and we talked and laughed about how in high school never in A MILLION YEARS would we have believed that 25 years later we would be doing a triathlon together!!

The bikers route took then looped around a point, then then came back past the venue and did another point before heading back.  Marc zoomed by: 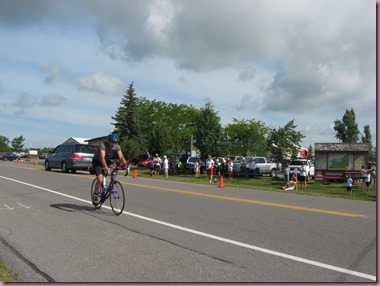 With that, I headed back over to the transition area to stretch and run a little to warm up.

I watched the really fast people come in and it was pretty interesting to watch them quickly hang up their bikes and get into running gear and head out.  It gave me an itch that maybe I could do the whole thing myself next year!

Sooner than I expected Marc came flying in – blistering his normal pace – he had really pushed himself.  He hopped off the bike, ripped off the chip which I quickly fastened to my ankle and took off. 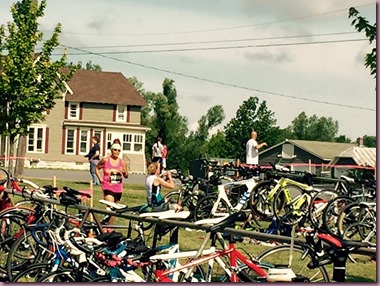 It was a hot one and I was winded quickly.  I admired all the people I passed, knowing that most if them had swam and then biked and were now finishing up with a run – pretty impressive!!

I came in at a 9 minute mile pace and was pretty disappointed.  I have a lot of work to do on my diet and running if I ever want to achieve times like I did even a year ago.

But today was not for feeling sorry for myself.  Instead, we celebrated our finish and when the awards were announced, we came in third for the team portion: 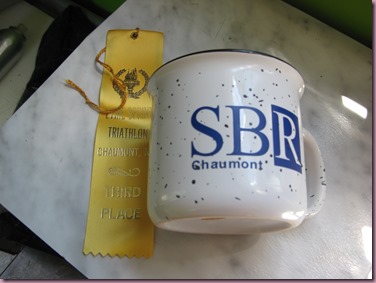 I was happy about the day, more because I got to support one of oldest and bestest friends.  She will continue her journey as I will continue mine and who knows what might happen next year at this time!

If she can go from hospitalized to taking part in a tri in one short year there is no stopping her or me or any of you out there reading this!!!