Anyone been wondering where I have been?  Maybe not…

Thursday, the early December curse continued as we received some potentially bad health news about Marc’s dad.  We don’t know anything yet, so I’ll wait before entering drama mode.

Friday dawned and I had been asked to be a speaker for a group of professionals.  That, fortunately went off without a hitch.  I was able to spend a minute reflecting on the difference between speaking in front of a large group now versus when I was fat.  I always have been pretty good at and comfortable at public speaking, but there is even less pressure now that I don’t worry about being judged.

Friday night brought me to a housewarming party.  And stuffing myself silly.  I really am baffled why I can’t get back on track, eating wise.

Yesterday, though, I was determined to make some progress.  So first thing in the morning I was outside with the dogs and we did walk/run intervals.  Chakotay started off strong but was lagging some by the end, but in total we ran 7 and walked 3.  Not too shabby.

And then it was time to concentrate on making dinner for my mother for her birthday.

I had decided to make a full turkey for my first time ever.  I got advise from various people and bought those Reynolds bags.  First off, I didn’t remove the giblets.  We noticed quite quickly, forturately, but had to take the turkey back out of the oven, unwrap it from the bag, and get the giblets out.

As a reward for their hard exercise that morning, the boys got the giblets! 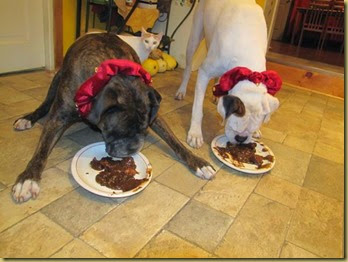 Mom and her boyfriend, Lee, arrived and I was quite impressed with the way everything was coming out.  I thought my timing was perfect.

Until we cut into the turkey and it was still pink.

Back into the oven and waiting.  When it was ready, Marc began cutting and – something wasn’t quite right.

Lee gently shared that we were cutting into the back.

Yes, I had cooked the fucker upside down.

I was pretty upset at my screw up, but really, the only harm was no crispy skin.  Which isn’t that good for you anyway.  The turkey was moist and I had made some acorn squash that I stuffed with fresh cranberries and walnuts.  That was awesome.

So despite some folly, it was a good evening.  But seriously, people, could I be a bigger IDIOT?

Today is the anniversary of my head on car collision when I was 16.  So I will get through today and leave the curses behind me!

Posted by Jennifer Hudson Mosher at 9:47 AM