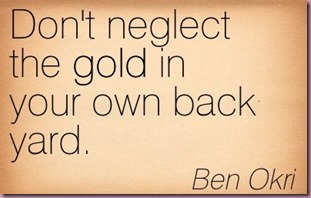 HA!  What a perfect quote for today.

My vegetable garden has been VERY important to me the last few years.  I love watching the plants grow and having fresh veggies to eat.  There’s nothing like going out and grabbing some beans or a zucchini right off the stem and eating it for dinner.

I also blanch and freeze vegetables to have well after the season is over.

But this year?  I just wasn’t feeling it.  I think because the winter was SO EFFING MISERABLE that when it finally warmed up I just wanted to be outside doing exclusively fun things, not worrying about “work” – even enjoyable work.

So I reluctantly – and late – rototilled and made a half-assed effort of planting seeds.  My flower gardens suffered as well.

And since then?  I haven’t done a damn thing.  And while on vacation I’ve been ignoring the garden, knowing that the weeds were taking it over.  On Monday, I told Marc that I was dreading weeding the garden, but I didn’t want to just let it go to hell, either.  He pointed out in Lowe’s a small rototiller attachment that attaches to our weed wacker.  He said that this could make weeding a little easier.

Today I resolutely went outside and started in utter dismay.  My neglect was in full display.  It looked like a fenced in grassy area.  FUUUCCCCKKKK!

But Marc attached the new rototiller attachment and I went to work.  5 HOURS LATER I could barely hold on to the weed wacker my arms were so tired and the garden was only about 70% done.

It’ll have to be good enough.  It just shows what a good dose of neglect will get you.

We’ll still have some veggies, although some were choked out by the weeds, so I consider this year’s garden pretty much a failure.

Kinda defines my year this year!!