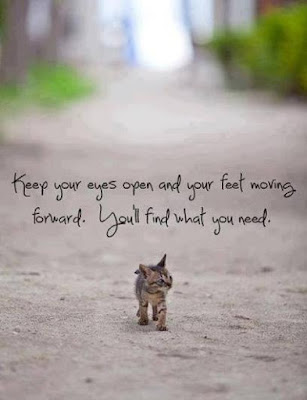 Do you believe this?  I so admire people who live as if everything happens because it was meant to be.

Aren't those type of people so much happier then those of us who worry and stress and second guess ourselves?

As you guys know, I do a lot of yoga.  I've gotten so much more flexible and physically stronger and my terrible balance has even improved.

But finding my Zen?  The quieting the mind and finding that inner peace?  I don't know that I'm any closer to that today then when I started.

But I know I have improved in one area - I used to be almost obsessed with what others thought of me.  On being judged on how I look.

I came home yesterday and it was humid and 87 degrees.  So when I decided to do some running, I decided to put on some short shorts and a sports bra.  I briefly hesitated given the fat rolls making themselves very known.  And then I thought "Fuck it!" it was HOT and I was going to be out there doing it, right?

Of course, I also didn't think I'd see many people given the rural road I live on.  As Murphy's Law would have it, about 1.5 miles in there were a bunch of guys resealing a neighbor's driveway.

I briefly wondered if they were making fun of me as I slowly ran past them with everything jiggling where it should not jiggle.  I decided that if they were, so be it.  And when I had to run past them again on my way back, I barely thought about what they might or might not be thinking.

Being of strong mind is crucial in this journey, I think, and I am striving to attain this.