For many years, the communities that run along the old Erie Canal from Buffalo to Albany have been working on making a 500+ recreational trail that runs alongside the old canal.  It's for runners, hikers, bikers, snowmobilers, horseback riders, etc.  The trail is not 100% complete but there are large sections that are, and even the places that aren't finished, you can usually travel on city streets and get to the next section.

Anyway, since Marc got his mountain bike, he's wanted to head down to Syracuse and do a section of the trail.  I have so far not enjoyed trail riding, but Marc assured me that this trail was surfaced with crushed stone and would be relatively easy riding.  What better day then an 87 degree vacation day??!!

So we got around early and headed out. 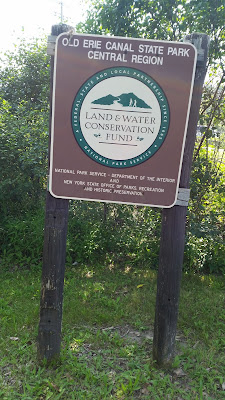 We started where the trail basically starts in East Syracuse with no plan about how far we would go.  The trail was indeed crushed stone and my hybrid held up well.  It was mostly flat and we could ride side by side for much of it.  But I found riding on stone is still much more challenging than riding on the road. 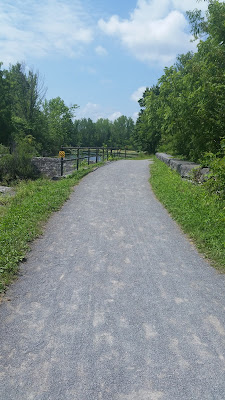 It was hot and humid and we cruised along next to water the entire way.  We saw runners, other cyclists and walkers.  In addition, we ran across a ton of song birds, chipmucks, rabbits, some VERY pissed off geese, a blue heron that took off in front of us and - my favorite sight - 4 black weasels that crossed our path!!! 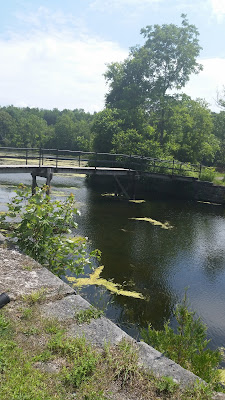 About 17 miles in, we entered the small city of Canestota.  We looked for a park but couldn't find one.  So we continued on a short distance and found a bench along the trail to stop and have the lunch we had packed. 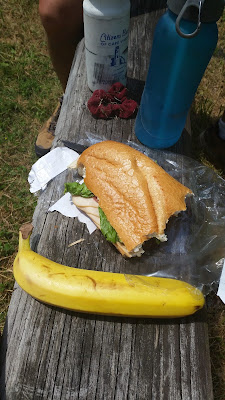 A half sub and a banana. 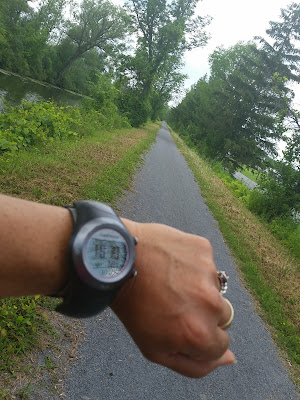 Feeling refreshed, we continued on, and almost exactly 20 miles in we reached the trail end where we would have to hit the streets.  It made sense to turn around and head back.

It was HOT and Marc and I had drank most of our water so we made a short detour to McDonald's in Canestota to refill our water.  Pushing on, I found myself getting fatigued about 30 miles in.  We stopped for a delicious energy helper: 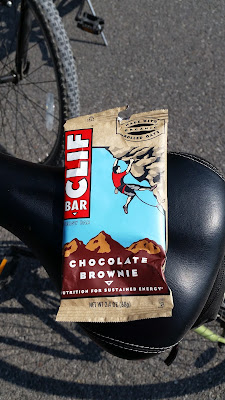 We made it back having traveled 41 miles and were sweaty, dusty, and happily exhausted.  I don't see us becoming regular trail riders, but it was something different to challenge ourselves with.