The pressure is on!

Marc and I were talking today about someone he knows and his weight battles.  This person has been talking about needing to lose weight and get in shape for a couple of years now.  He is quite young but received some dire warnings from his doctor about his weight and needing to improve his health before he is in real trouble.  Meaning NOW.

Every time Marc talks to him, this friend brings up how he knows he needs to do something.  But, like so many of us, he has a litany of excuses why he can't eat healthy and can't get to the gym.  He also has the habit of asking Marc about these quick fix devices - like shakes - to try to lose quickly and with little effort.

Marc is one off the most patient people I know with situations like this and has been very gentle and encouraging and has given him ideas and truly wants to help him.

But as time has passed he has gotten a little frustrated that his friend continues to talk but takes no action.  He said to me tonight that he thinks it's time to give up because he has to want it and he's clearly not ready.

As I well know, that is true!  Until you're ready to change ain't nobody going to make you do it.  BUT - what is the value of pressure?

I think pressure can be a positive motivator.   Having a friend constantly asking you about your food choices and/or exercise, joining an online forum on healthy eating, having an app on your phone that tells you to get up and move - shit, even getting on the scale daily - those are all pressures that can be ANNOYING AS HELL - but also incredibly effective.

The constant pressure of being reminded of your goals?  Of why you need and want to take a journey - as the saying goes you can lead a horse to water but you can't make him drink - but you CAN make him thirsty!!

So I told Marc that since his friend keeps bringing it up, he clearly has some desire to change.  Marc will never be able to make him change, but who knows when he might finally be ready?

So that's why it's important to have someone(s) or something(s) that place pressure on you.  Get the app that asks you what you're eating today, enlist a workout buddy, go to an Overeaters Anonymous meeting, get a dog who likes to walk, sign up for a 5K - keep that positive pressure on!! 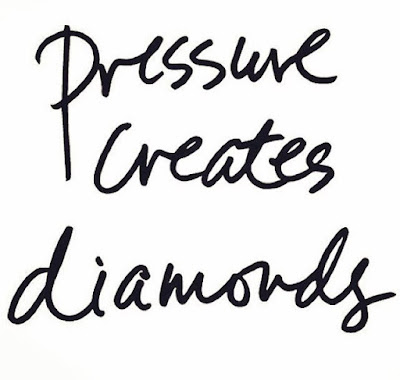