A friend and I were talking last week about my food choices.  She commented that she doesn’t know how I stick to a “boring regimen” of food.

She says that she has to have variety and/or just go out and decide spur the moment what she will have for lunch that day.

I have to admit that sometimes it does get a little boring.  I have almost the same thing for lunch on each prescribed day – like Mondays are almost always a bag of steamed green beans mixed with a can of grilled chicken.  And every day, it’s a banana for lunch “dessert”.

I’m a little more “wild” (NOT) with dinners.  I try to mix it up and try new recipes, but I don’t have the energy to put the time and effort into seeking out healthy recipes and gathering the ingredients and making them.

Therefore dinners usually consist of a lean meat (chicken, turkey), a healthy grain (barley, brown rice) and a ton of veggies.  Most times on Sunday night I’ll know what we are going to have most of the nights of the week.

Sometimes I do get sick of the same thing.  But I know myself – if I don’t plan, that’s when I get into trouble.

If I headed home not knowing what we were going to have, the thought of just picking up something would enter my head and that choice would typically be something unhealthy.

And lunches?  Well, going to work without lunch would add up to me wondering what I was going to eat.  And I work with some people that go out every day and get their lunches.  I could go with them and I could get something healthy like a salad.  But I wouldn’t.

The routine does sometimes make me feel like I am boring and that maybe I should give spontaneity a shot.  But I think I would totally be setting myself up for failure!

Hopefully I’m a little more exciting in other parts of my life!! 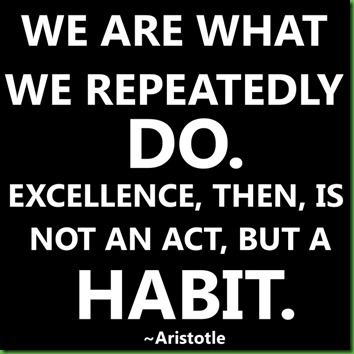