brag·gart  [brag-ert]
noun
1. a person who does a lot of bragging.
adjective
2. bragging; boastful.


This is me today.  There is part of me that is ashamed about being such an attention whore, but I'm also pretty excited.

Today we met for our normal team meeting.  I remain perplexed why the room we have our meeting has to be freezing cold every week.  And it's not just me, most of the people in that room are cold.  So if you add in my normal existing coldness it's even worse.

So I was in there from about 9AM-11AM and then we went into the courtroom for an hour which is a pretty cold room, too.

Needless to say when it came time to run - even though it is sunny and milder here, mild in Northern NY in April means 38 degrees! - I didn't want to go outside.  I wanted to huddle in my warm office and drink hot tea.

Add into this that I watched my normal sized co-worker eat 2 granola bars, an orange and a HUGE chocolate chip cookie from Panera Bread that someone had brought in while I drank water during the meeting.  So I was in full on pity party mode.

I got dressed and hauled my fat ass outside anyway.  And actually I warmed up pretty quickly and it was a nice run in the sun with almost no wind and little humidity which meant I was breathing well.  I knew I was making a pretty good pace for me.

I did a full 7 miles and scrolled through my watch to see my splits as I normally do and saw this: 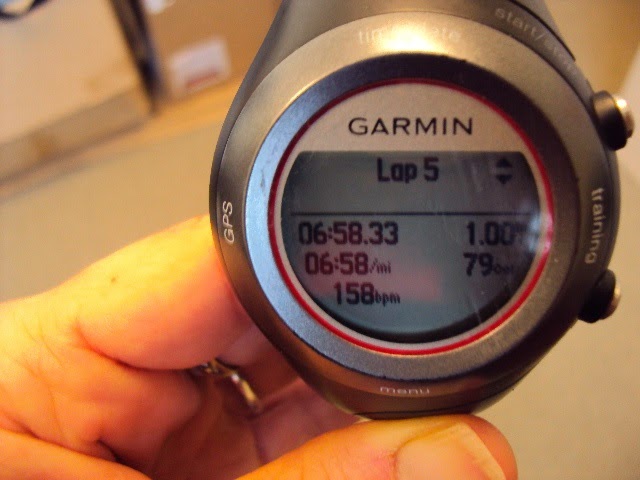 What makes running a mile in 6:58 more spectacular then running the previous "record" I had run of 7:03?  Well, absolutely nothing.  Just like weighing in at 118 doesn't really make me thinner then weighing in at 120.

But for someone who tends to be a little number obsessed - cracking that number felt like a major victory!

So I went back into work and proceeded to brag shamelessly to my co-workers.  They have to be so sick and tired of me constantly boasting about my running.  But the one security guy, who I like SO WELL, grabbed me and said "That's terrific, sweetheart!"  I tried to pull away so he wouldn't get my gross sweat all over him, but he held on, and it made me feel so good!

I remain humbled and surprised and grateful at how much support I get from people.  I also have to admit, that I sometimes get disappointed in those that I expect to support me or cheer me on who don't.

I can't say that I expect that I will regularly run under a 7 minute mile - my 7 mile average was 7:37.  But no one can take away what is for me a milestone of sorts.  And now I'll try to step back from being a pathetic braggart!!