A bit of a touch up!

It was 2010.  I was at the very beginning of my journey and I was motivated and enthusiastic,  I decided I wanted a tattoo to symbolize what I was going through.

I chose the phrase Defy Gravity from the musical “Wicked” and I wanted to be surrounded with musical notes.

I checked out a couple of tattoo shops and got reviews and went out to one.  I told the girl what I wanted and she did a design.  I liked it, but turns out I didn’t scrutinize it carefully – just blindly (and STUPIDLY) trusting the artist - and had her slap it on.   I read a book while she was doing it.

When she was done, it was good, but not great.  And there were some mistakes and the phrase that meant to much to me?  Well, you could certainly tell that’s what it said, but only if you knew the words.  And it wasn’t nearly as colorful like I had requested.

Again, my own mistake but I never went back to see if it could be changed or altered more to what I wanted.

Fast forward.  Yesterday we had graduation.  Before the ceremony as people were milling about and we were waiting for people to arrive, someone pulled out his guitar and began playing and singing.  I couldn’t resist and was pulled over there by the force of my own ego.

“What do you want me to play?” he asked me.  “Wanted: Dead or Alive by Bon Jovi?” I asked.  He smiled and began the guitar intro.

And we sang.  I sang loud and without reservation.  And then we sang another song.  And one more for good measure.  We got applause, and people that apparently didn’t know I have a musical background were quick to tell me how awesome we both sounded and how they thought it was so cool.

Afterwards it came to me how much fun that was and I realized how much I MISS music and performing.  Now look, I was never good enough to be a professional singer, but as a hobby?  I’m a decent singer and I enjoyed it A LOT.  And standing there singing my heart out?  It as like I found part of me again.

I’ve said many times that this journey requires a ton of sacrifice.  And I’ve sacrificed many things.  But as I reflected on yesterday today, I realized that my life has become pretty centralized on diet and exercise and lots of things I enjoy have disappeared.

That’s a small price to pay for this new life I have, but still…

So today I “should” have gone outside and ran 6 miles like I planned.  But I didn’t.  Instead I went to a tattoo shop.  I told the guy what I liked on my tattoo and what I didn’t.  He was literally just finishing up another guy and had nothing booked.  He told me what he could do – what he wanted to do.  We struck a deal and 5 minutes later he was working on my tattoo.

We started talking and – believe it or not – his father is a counselor and we worked in the same building 20 years ago when I was pretty fresh out of college.  SYNCHRONICITY?

He went above and beyond what I expected.  He hated the lettering and told me to trust him.  He covered it up and re-printed.

So I sit here with my leg throbbing, but pretty happy.  It turned out great, in my opinion.

I already had a tattoo there – it wasn’t new, just improved.  And I am so HOPING that this translates to me journey.  I don’t need to start over, I just need a touch up! 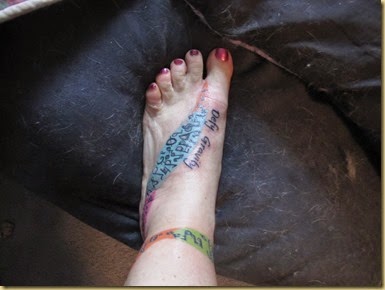 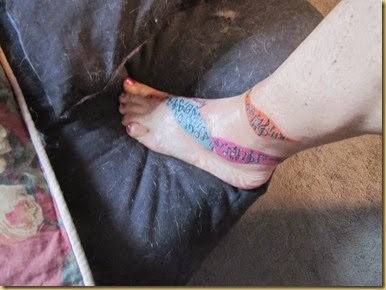 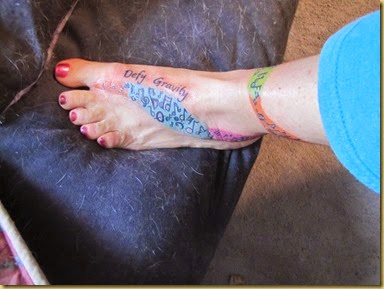 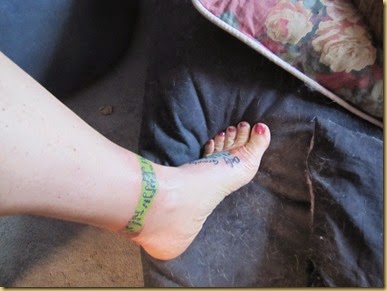