All week they were calling for the weather to be cool and rainy today.  They were not wrong and when I woke up this morning, I expected that my mood and the weather would be of like mind.

Well, they kind of were.  It was not as cool as predicted and there was only a light drizzle.  I expected that between my weight and my leg, I would be in crappy spirits but I wasn’t.

I again adorned my magic tutu as we left for the race. 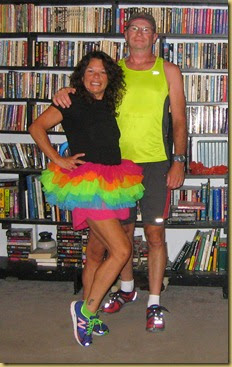 We got to the race venue and signed in.  Since this is the Run for Recovery I saw a lot of past and current clients as well as colleagues.  I was also approached by lots of runners I had seen at past races with the “Hey! I know you!” type comments.

My tutu received more attention then in the past – from the “I LOVE it!” to “Did you lose a bet” to a former client saying “Don’t you know you might be on tv??!!”

We lined up and it was just a light spitting of rain and humid.  The obligatory pre-race instructions and speeches and then the air horn.

We took off.  My leg started to hurt immediately.  The Achilles was holding up, though.  I was not feeling great and only 1.6 miles in, at the 5K turnaround, I was wishing I had chosen the 5K option.

But I carried on.  We raced along the wet streets and it was surprisingly humid.  I thought we would never reach the turnaround, but at about 2.75 miles I saw the fast guys coming at me and knew I was close.

I saw a woman coming and knew that I would not be taking first this year.  She was not all that far ahead of me but looked strong.

At 4 miles I was ready to stop and walk and my leg was THROBBING.  Fortunately, although it was a fairly flat course, we started a very slight downhill jaunt and the wind was at my back – but the rain had picked up.

I started to pass some of the slower 5K walkers and could hear “You GO!” and “Nice tutu!!” above my music.

At a turn about 5.25 miles in, a group of cheerleaders were waiting and climbed into a pyramid cheering and pointing at me.  I gave them a thumbs up.

It really started to rain, but I was in the home stretch.  As I hit 6 miles, a woman suddenly  passed me and I felt like yelling in slow motion “NOOOOOO!!!!!”  But I was gassed and had nothing left to try to catch up.

As I crossed I saw the timer and was shocked at how terrible my time was – 48:42.  I was terribly disappointed.

I waited the couple minutes for Marc to finish and we made our way to the venue building to eat.

So the final unimpressive stats:

I did manage to come in first in my age group by some miracle and got a medal. 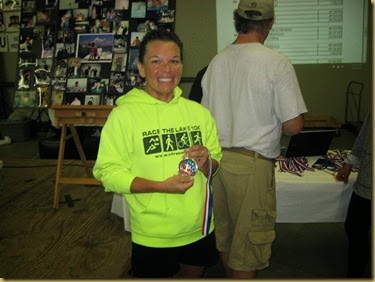 I shouldn’t be all that surprised or disappointed , but I am.

BUT here’s the kicker – as we were leaving I heard someone yelling my name.  I turned around and recognized the mother of the client (who was the runner I ran in a couple of races with) who died of a heroin overdose earlier this year.

She came running up to me and instantly her tears started to flow.  She handed me a t-shirt that said his name and a message about running in his memory.  She said that she had gotten it made for me, and that she believes in her heart that he could not be saved from the tragedy that is addiction, but that my program had allowed her 21 months with a clean and sober son, where she got to know him and love him.

I instantly choked up and assured her that every time I run a race I think of him and that I would wear the shirt proudly and that he would never be forgotten.

She looked at Marc and said something to him about how she had called me when he first got in trouble and told me – a complete stranger at the time - that I was the only one that could save his life.  She said “That was a lot of pressure I put on your wife, and maybe it wasn’t fair, but I am so thankful to have had the time I did with him thanks to her.”

And I hugged her as the rain started to POUR.  I was at a complete loss for words as she let go of me and said goodbye.

And as I got into my vehicle with Marc, we were both solemn and I realized that even though things are not completely as I would like them to be be, I am alive and, blissfully, free of the torture that this wonderful young guy suffered from.