FRY me a river…

Yesterday we went to the NYS Fair and the Kid Rock concert.  As I told you guys it was the "Party Like a Rockstar" sweepstakes that I won.

We wandered the fair looking at all there was to see.  The food there? OH.MY.GAWD.  It was standard fair food - with fried stuff galore!  Of course there was the standard fried dough and Belgian waffles.  But they had fried OREOS at dozens of places.  And fried broccoli and cauliflower and cheesecake on a stick and chocolate covered bacon on a stick and French fries SLATHERED in gooey cheese!

I would like to tell you that I was so strong that I had no desire to eat those foods.  But that would be a lie.  I DIDN'T eat anything like that, but that was only because my cheapness won over my gluttony.  $8 for fried dough?  I think not!

Oh well, take the victories no matter how they come, right?

The contest was sponsored by the local radio station and - wait for it - LABATT!  Ironic, right?  So one of the marketing reps met us at the fair.  He bought us dinner.  I went for the 1/2 rack of ribs from Syracuse's famous Dinosaur Barbeque.  It came with a side of baked beans and coleslaw.  Probably not the best choice, but not the worst choice, either. 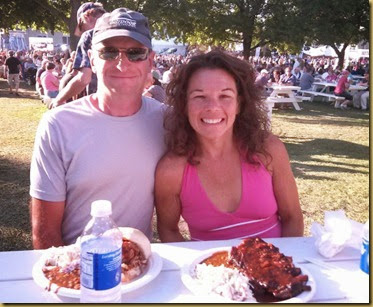 As the grand prize winner, he spoiled us rotten - giving us all kinds of swag, buying us concert t-shirts and giving me a gift card.  He and I also went on this insane slingshot ride where we were flung in the area on these bungee cords.  It was nuts and I did scream like the girl I am!! 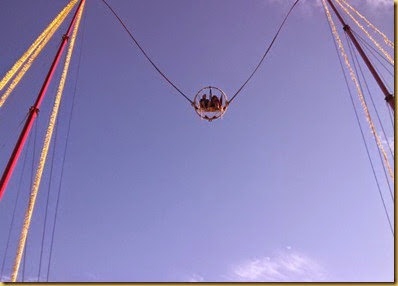 The last time I went on a ride like this, I was still fat and they had to WEDGE me in.  It was humiliating. No such problem this time and the guy had to really pull to tighten the straps down.

In what I saw as a victory of sorts, I reviewed the photos that he took of Marc and I and I actually don't think I look terrible.  I didn't see huge amounts of fat dripping off me.  Will wonders never cease? 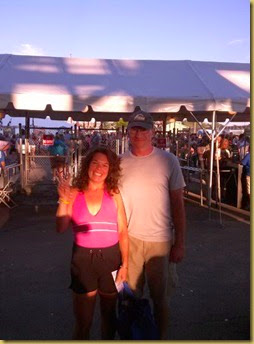 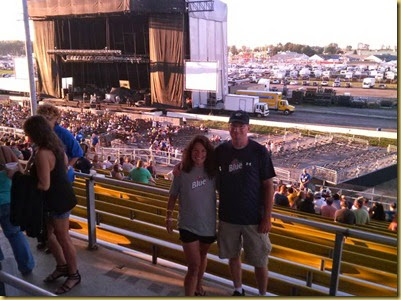 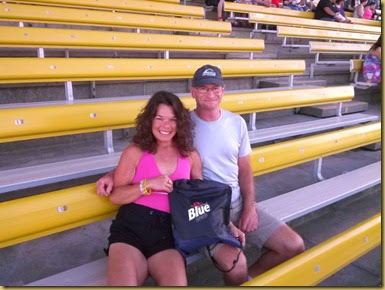 And I have to be honest - I felt terribly greedy allowing this guy to buy all this stuff for us, but he kept saying that he has an expense account and that as the winner I should take advantage of it - it was pretty awesome but uncomfortable at the same time...

So tomorrow I'll talk more about the concert itself!!