Today Marc and I rode in the Ride for Dignity.  It is a bike race to benefit Dignity Boxes which are provided to people after natural disasters.

It was my first biking event.  Getting up and getting ready was much different for me then when I do a running race.  I was not nervous or hyped up for some reason.

We got to the event and saw many more people then we expected.  There were 2 options – a 50 miler and a 25 miler.  We had signed up for the 25, so by the time we got there, the 50 milers had already started their race.

We signed in and then milled around.  I looked to see if anyone I knew from the running events were there and I didn’t see anyone.  Most people had expensive road bikes, so I was a little insecure about my cheap hybrid.

There were also a few teams – all dressed in their team outfits and they stuck together.  It felt cliquey to me.

We lined up and were off.

I have only ridden with Marc and I was a bit nervous riding with a bunch of other riders.  We made the first turn and people were all grouped together and the teams that ride together all the time were yelling out things to one another and that only made me more nervous. 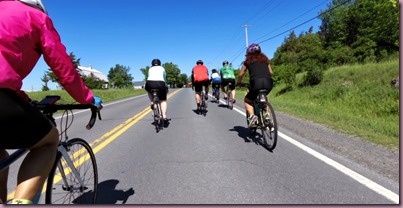 But we then got into a groove and I noticed immediately that there was going to be a lot more back and forth than in a running race.  Given conditions, some people are better during certain sections and so they would go flying by me, only for me to catch up a mile later and pass them.

About 10 miles in, a group had gone out front, there was a whole grouping in the back, and literally between was Marc, I and another woman.  I had tried to convince Marc to ride at his own pace and not let me drag him down, but he insisted that he wanted to ride with me.

We must have passed her and she passed us 7-8 times.  It was a continuous back and forth.   She had an extremely nice bike and I noticed how obvious it was that, unlike running, equipment makes a HUGE difference.  The people with nicer, expensive bikes – especially the ones designed for road racing - could definitely surge ahead.

As Marc and I cruised down a long stretch with just the 2 of us I told him that I have decided that I want to get a better bike.  My Achilles is healing, but is still extremely swollen and painful and I even walk with a pronounced limp – as painful as it is for me to accept, I’m not sure when – or if – I will be able to resume running.  So I would like to have the equipment to ride further and faster if biking is going to be my primary form of exercise.

Riding with others had pushed me to go faster than normal and about 17 miles in I started to fatigue.  Shortly after that, we came around the bend and I saw that we were about to hit a relatively short, but extremely steep hill.

I struggled to make it up, and it didn’t help that we had been fighting a strong wind all day which we were now headed straight into.  When we got to the top I saw 3 riders stopped and at first I thought the one woman was hurt, but I guess she was just spent from struggling up the hill.

We continued on and were in open farmland and the wind just HOWLED straight at us.  We passed a larger woman who had been in the front pack and she was making the most horrible noises.  She was actually almost screaming and moaning at the same time – in a different context you might have thought they were screams of ecstasy.  Marc looked at me and we were both like “awkward”!

I passed the girl that had passed us many times as she was really having trouble against the wind, and, as I had made it my goal to beat her, mentally claimed victory – hoping that I could maintain my lead over her until the end.

We took the final turn and cruised DOWN a steep hill to the end, crossing the finish at 25.15 miles with a 1:45:56 time – that’s an average speed of 14.2 MPH – faster than my normal and not bad, especially considering the wind. 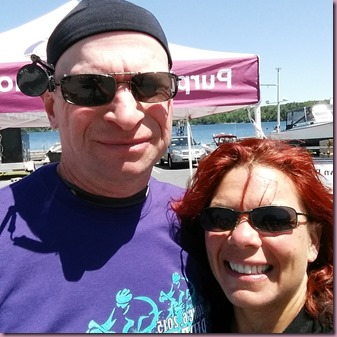 We then headed in for the spoils – a spaghetti dinner… 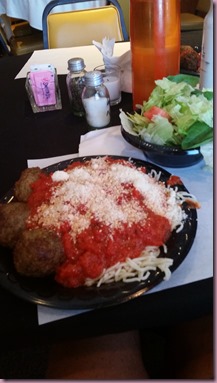 The guy who organizes this is a hippy dippy “everyone is a winner!” type guy, so the prizes were randomly drawn, not based on finish.

I am happy with how I felt, although there is not the same sense of accomplishment that I feel when finishing a running race maybe it is just my general feeling like shit that I can’t pull myself out of lately.

We hope to ride in a more intense, much larger bike race in July – we’ll see how I feel after that….
Posted by Jennifer Hudson Mosher at 11:00 PM