For the love of (healthy) food!

It is no secret that I love food. And so do most Americans. However, we have become a nation addicted to highly processed unhealthy foods. The companies that produce these processed foods know exactly what they are doing. They know that the more they get people addicted to these foods the more people will eat their products leading to a sizeable profit.

We know some of the names of these substances having heard them in the news - like high fructose corn syrup - and we know they are bad for you. But did you know that some, like MSG (monosodium glutamate) is a preservative that deliberately inhibits the hormone Leptin, an appetite regulator??!! I mean that preservative’s PURPOSE is to keep you from feeling full so you’ll eat more!!!

When I was obese I ate a lot of processed foods, but I was lucky that both Marc and I grew up in families where meat and vegetables were served. So we didn’t live totally out of boxes, so to speak. But it was common for us to throw together some of those instant mashed potatoes rather than making potatoes from scratch. We worshipped at the alter of cheese and cream sauces and “instant” rather than making healthy items. And of course, there was always - ALWAYS - cheap and unhealthy desserts like Little Debbie and Chips Ahoy and Oreos. Don’t forget about my PREMIER drug of choice - MOUNTAIN DEW.

I could always rationalize that I ate my vegetables - usually boiling up corn and covering it with salt and butter. Or I’d make myself a nice big salad and then DROWN it in creamy Italian dressing.

Despite my struggles, that lifestyle is well in the past. Marc cook dinner together every night. That’s not to say that sometimes we aren’t “naughty” and eat more sugar than we should or make not so great choices. But, overall, we have eliminated those type of items from our diets.

That isn’t to say it came easy - like any addict, I resisted change. There was a part of me that really wanted to get healthy. But the part of me that was addicted to these shitty food screamed and cried and DEMANDED processed food. I clearly remember the summer of 2010 when I first started this journey - I had lost about 40 pounds and was feeling pretty good about myself when I ran into someone and we chatted for a short while. Or I should say that this person talked while eating a GIGANTIC bag of Doritos as I stared enviously at the bag and tried not to drool. I realized later that I had no idea what we had talked about because I was so enamored by that forbidden bag of deliciousness that I hadn’t heard a word he said.

That shows how powerful this industry is. I believe to have a real shot at weight loss success you have to cut these foods from your diet completely. Forget the debates about eggs and butter and red meat and cholesterol and good fats and unhealthy fats for a minute. The #1 enemy is NOT a cut of steak that you cook on the grill. It’s these miserable processed foods - including from fast food joints!

Here’s the good news. Your body CAN be retrained. When I first started out, raw carrots sat like a lump on my tongue - how the hell do people eat like this I wondered. The list of things I refused to eat was long - things like tomatoes and fish. The list of food I had never tried - never HEARD OF - was vast!

Now? I seriously LOVE a good salad - WITHOUT dressing! Baby carrots taste sweet to me and are a MUCH more satisfying crunch than potato chips ever were. Marc cooked us Salmon last week and it was DEVINE! I love tomatoes. Mixing baked acorn squash and fresh cranberries together is like a sweet dessert!

I’ve learned to get out of my box - I peruse the produce section looking for items I have never tried and try them. Some I LOVE and others maybe not so much. But coming up with new things to eat and new ways to cook is a welcome challenge. I am never going to be someone who loves cooking - I’m just not. But on the menu tonight is turkey chili - and I will be much happier cooking that and letting it simmer while Marc and I do our nightly workout than I would be pouring instant mashed potatoes out of a box and slurping them down slathered with butter.

For those of you that have embarked on a healthy journey, how about you? Have you found that your body has learned to love healthy foods? Are there things you eat now that you never did before? Please comment!! 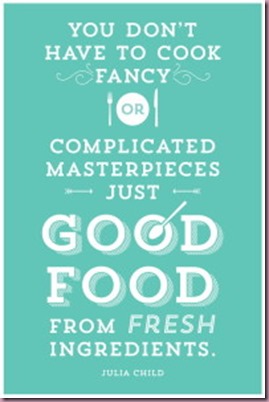