Last night Marc and I were watching the show "Do No Harm".  Don't bother to look it up because they canceled it :((  Anyway, the series involves doctors and in last night's episode there was a man with a mass in his brain.  There were 2 doctors there talking to him about it and one was trying to be optimistic and soften the blow when talking about surgery and aftercare while the other doctor - more of a blunt realist - was trying to prepare them for the worst.

The partner of the man with the brain mass said to the first doctor "We don't need to be comforted!  We need to know what we're in for."  Or something to that effect.

And that got me thinking - am I the type that would like to be coddled a little in that situation or would I want to hear the worst case scenario so I could be prepared?

And then I thought about a thread recently on the Runner's World forums where someone asked if all runners lied to themselves.  He was talking specifically about doing something like "promising himself" that he would only have to run 4 miles instead of 6 or something like that to get himself out the door.

I laughed when I read that thread, because I do that ALL THE TIME.  I'll be dreading getting dressed to go run and I'll makes deals with myself, like "You only have to run 5 miles" or "If you want to stop, you can just walk instead of run".  Or in the evenings when I don't feel like weight lifting I'll say, "Well, just go down for 1/2 hour and take it easy."  Once I'm out the door and actually DOING it, I almost always do exactly what I originally planned, but those "lies" help to get my ass in gear.

On that thread, the field seemed about split.  There were others who lie or bargain with themselves.  Then there is another group who say that they NEVER do that, because if they make that "deal" they will end up taking the easier way out.

I once had a friend who was a terrible alcoholic.  He quit and struggled MIGHTILY, so he PROMISED himself that when he had 5 years clean and sober he would get sloppy ass drunk.  By the time 5 years rolled around, he decided he didn't want to drink.  I know that wouldn't work for everyone.

So is it healthy to lie to yourself or not? 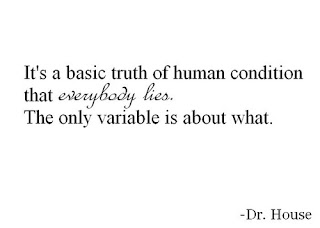 Gawd I miss House!  Anywho.  When I was fat, I lied to myself all the time - call it denial or lies, I did it.  I mean, I'd be watching football and they'd put up stats of a 6'2" LINEBACKER and I weighed MORE THEN HE DID and I would still tell myself that I wasn't that overweight.

Or I'd try to convince myself that my weight was not effecting my health.  Or that I wasn't eating that much more then a "normal" person.

And I hear other people lying to themselves - the scale went up 2 pounds "But I was wearing a heavy shirt when I weighed in."  Or telling themselves that they had a "tiny" piece of cake and it couldn't have been more then 50 calories.  Or that the "little nibble" here and there is not effecting her weight.

So those lies are clearly not to our advantage.  But then maybe some self-delusion is good.

I mean, I had to be pretty delusional to think I could lose this much weight.  And those "Polyannas" out there that simply REFUSE to think the worst, even when faced with overwhelming odds against them?  That's pretty spectacular, I think.  I once had a psychology professor who said the world sucks pretty bad and it's the people who see things clearly that are depressed.  The happiest people are those that are somewhat delusional.

And if telling myself the lie - to get my ass out the door - works?  What's wrong with that?

My current PROMISE to myself is that when I turn 70 I'm going to resume eating like a PIG.  And I'm going to gain weight and I don't give a shit. 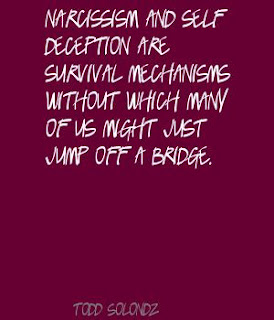 What lies - healthy or unhealthy - are you telling yourself?
Posted by Jennifer Hudson Mosher at 12:12 PM