Way back when I first started this journey, I used My Fitness Pal daily to track my meals and exercise and to “talk” on their forums with other people who were actively losing weight. As someone who was new to food labels and thinking about calories, I found that it helped a lot to keep on track.

For the most part people were supportive of one another, although occasionally there would be a random asshole who felt the need to trash other members - their choices and opinions.

I remember being on one forum and this middle aged woman asked the other members if they thought it was “okay” if she didn’t try to lose weight down to the “ideal”. She was short like me, and weighed well over 200 pounds. She had some minor health issues, but nothing acute. She wanted to look better but mostly to feel better and be able to be more active with her kids.

She said that to fall into the “normal” BMI range, she would have to get down to under 130. She did not feel that this was realistic and was aiming for more in the 155 ish range. She felt that this was “doable” and sustainable whereas the 130 was not. But she was concerned that it wasn’t “okay” (okay by whose standards?) that her goal weight was still in the technically “overweight” range.

Some asked her what her doctor thought, a tiny few were critical of this choice, but the vast majority told her that she shouldn’t judge herself at whatever weight that she chose to be and if she thought she would be happy at 155 she should stop there. They also noted that she might not want to decide right then - just work on a healthier lifestyle and when she got to 155 she might want to stay at that weight or maybe she would aim lower.

I was with her at that time as I weighed well over 250. The fact that I had gotten under 300 pounds was shocking. 250 seemed so far away and to even THINK that there as a possibility that I could get under 200 - a weight I hadn’t been since age 16? That would take nothing short of a miracle. So being okay with being less obese seemed very reasonable.  Forget about being “normal”!

And we all know that while BMI is a general standard, different people look very different at the same BMI numbers. Some look normal in their BMI range, some look very thin at even the high end of BMI and some look stocky. And that’s just cosmetically. Some people don’t feel good physically unless they are at a very low weight, where some people need to be technically overweight by BMI standards to have energy and feel good.

If you are not grossly unhealthy - either sickly thin or obese to the point where you are facing health problems, I guess you need to find what works for you.

After all my whining and bitching and self-pity and recriminations against myself for continuing to have primarily weekends full of eating too much and doubting that gardening is as “real” of an exercise as running, and pictures that make me think I’ve gained about 300 pounds, I got on the scale today to find that I am exactly the same weight as the first week of April. Ok, that’s not true - I am a WHOLLLLEEEEEE .1 lower.  (Go me with my bad self)

Perhaps this is just where my body wants to be. But I keep questioning if that is “OKAY”. Again, OKAY by whose standards?

My friend Christyne - who is not quite as fucked up in the head as I am - says that many of us work SO HARD to be “normal” - just NORMAL - but then we don’t even enjoy it when we get there. Although I don’t think that is always elite to those of us who have played the weight loss game.

And then I look at some people like Meghan Trainor - so young and so brave (in my opinion anyway) who acknowledges being “less than perfect” in the eyes of many and yet she loves herself anyway. 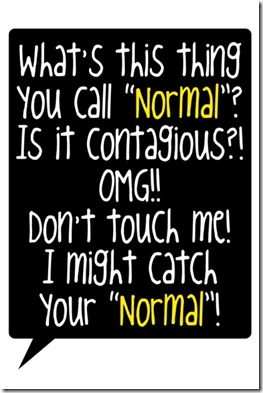