Life other than weight…

I have had very little luck trying to push worrying about my weight to the very back corner of my head.

I am hoping that as the weather gets nicer and I have more REAL things that matter to do, it will help.  This weekend served as a trial run.

I got home Friday after thinking about what a late start I am getting on the garden.  Instead of doing a requisite formal exercise, I got out the rototiller and began working at getting our large garden ready.

Since we’ve had the garden a few years now, the soil worked up quite nicely and I was able to get it all done.

So when Saturday dawned, Marc and I were able to take a long bike ride.  We came home and got lunch and then we were off again.

We hiked a trail along a large gorge.  Marc was less than enthusiastic, because he was so concerned that the dogs would fall or jump off the side. 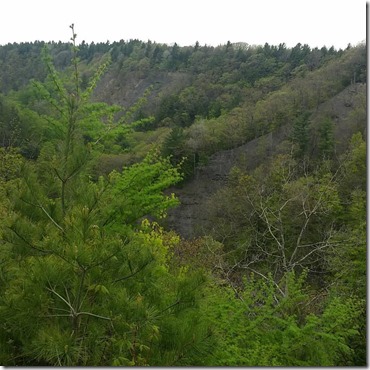 This is one of the shots I took.

We then stopped to get soil and seeds for the garden.

Remember when Sunday used to be a day I did a “long run”?  Yeah, me neither.  That Jen seems to have disappeared from my life.  I had NO DESIRE to run at all, let alone do a long run.

After much internal debate, I made my way over to a walking/biking trail with Archer.  The trail is about 3.5 miles from one end to the other.  We did the 7, although not without the desire to quit.

Are any of you out there true TRAIL runners?  Marc and I have been debating about trying trail running and he tried it last week.

When I was fat, I fell frequently and have twisted my ankle more times than I can count – including hurting myself pretty badly during a dance class in college.  So I am a little afraid of trails with rocks and roots and holes.

But we went over to look and it is a very short trail – 1 mile total, so we ran that.  I managed not to fall or otherwise hurt myself.  So I might try a longer trail run in the future.

I came home and got to work on the garden.  First I ran the rototiller through again on the reverse setting which digs it up deeper.  I really hope that will help with inevitable weeds that have become the bane of my existence in the summer!

I then planted green beans, sugar snap peas, corn, watermelon, zucchini, butternut squash and cucumbers. In the greenhouse I planted seeds of things that I've had a hard time getting to grow in the past - hoping to get them started and have better luck - brussel sprouts, spinach and eggplant. 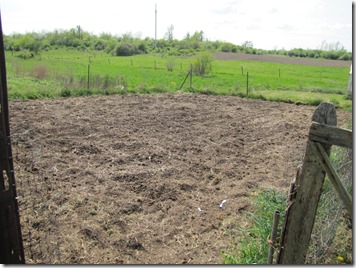 It doesn’t look like much now, but I’m hopeful it will produce well for me this year!

After this was done, I was ready to rest – but Archer – who you would THINK would be tired – had other ideas! 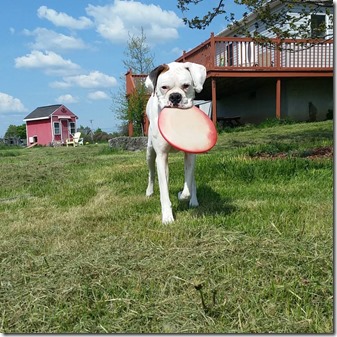 With all this you would think that I wouldn’t be obsessing about how many calories I had burned and if I had “earned enough” for dinner.  But NOOOOO that would be way too easy, right?